An HSLuv implementation in typescript, ported from the definitive reference Haxe version.

Chances are you already know what HSLuv (formerly aka HuSL) is if you're here, but if not, HSLuv is a color scale meant to be easy for humans to interpret. This package primarily exists to implement two color spaces: HSLuv and HPLuv. However, in the process, we also implement transformations for rgb in numeric, rgb in hex strings, hsl, xyz, luv, and lch, as well as the lightness to y channel transform in both directions.

What's interesting about HSLuv is that the apparent brightness is normalized. If you've tried to pick color palettes in the regular HSL space, you've probably noticed that at the same lightness, the colors in the blue end of the hue appear far darker than the colors in the yellow end.

HSLuv fixes that. For any given hue, the apparent brightness of a given lightness is meant to be simiar (using a whole bunch of complicated math and human measurement.) 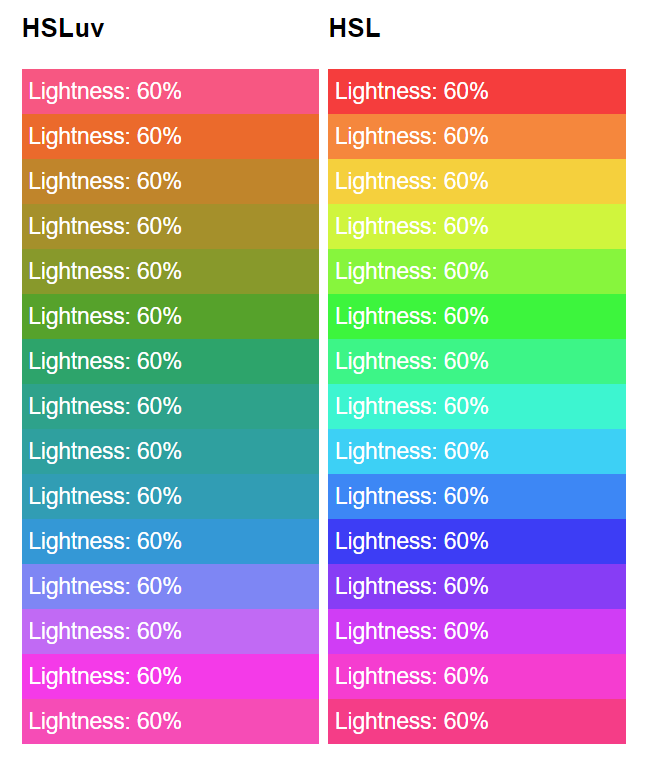 The downside of HSLuv is that there are colors it can't represent. There is no blue with the apparent brightness of canary yellow.

HPLuv makes these work by sacrificing saturation correctness. HPLuv will always produce a color, but sometimes a less satisfying one than HSLuv.

The following functions are exposed.

All functions take two arguments, according to the types in their names.

This implementation passed the author's 24,000 tests. By comparison to the reference implementation, calculations are accurate to within 1 in 1015, which the author says is fine.

This implementation is CI tested under Node 8,12,13 on Windows, Mac, and Ubuntu.

Wait, are there two of these?

I made this because Typescript wasn't on the author's somewhat extensive language list, and because the Haxe tooling wasn't very convenient under rollup. When I was done and tried to publish, I realized someone else already had done this, and even used the same name I did; it was just missing from the author's list.

However, my approach to typing, packaging, and tooling is mildly different than theirs, so I'm gonna publish anyway. Besides, it's already finished (sigh ,) and I like some of the differences in mine between these two projects.