Around 18 months ago, while working on what is the largest cyclejs codebase I know of (~20K lines of javascript), I realized how hard it was to actually make sense and maintain a large cyclejs application. Focusing on those issues derived from cyclejs usage and compunded by application size:

And yet, while that application was large, it cannot really be said to be an exceptionally complex application. Rather it was the standard CRUD application which is 90% of business applications today. No fancy animations, adaptive ui as the only ux trick, otherwise mostly fields and forms, a remote database, and miscellaneous domain-driven workflows.

This was the motivation behind my dedicating my (limited) free time to add the missing capabilities to the framework. I singled out those four areas : componentization, visual debugging, testing, concurrency control. I am happy that finally the first step is in a sufficient state of progress that it can be shared.

That first step is a componentization model for cyclejs, that builds upon the original idea of a component as a function and extends it further. Components are (mostly) what they used to be. Components can however now be parameterized through a dedicated argument settings, capturing the component's parameterization concern, and which is inherited down the component tree. Components, importantly, can be built through a series of component combinators which eliminate a lot of stream noisy, repetitive code. Those component combinators have been extracted and abstracted from the 20K lines of code, so they should cover a large number of cases that one encounters. The proposed component model could be seen in many ways as a generalization of that of React, extending it to handle concerns other than the view, which opens the door to using a JSX-like syntax if you so fancy. The component model also sets up the work for tracing and visualization tools for the second step, without any modification of cyclejs internals.

This is really a working draft, akin to a proof of concept. Performance was not at all looked upon, combinators only work with rxjs, the version of cycle used brings us back to the time when cyclejs could still be considered a library (vs. a framework), build is not optimized, console.logs are all over the place, only tested on chrome evergreen, etc.

It works nicely though. It succeeds in providing a higher-level abstraction so you can focus on the interdependence of components that defines the user interface logic, rather than having to constantly fiddle with a large amount of implementation details.

Each combinator features (and if not, will feature) a dedicated non-trivial example of use, and is documented and tested. A sample application is available to showcase how combinators work together with components to build a non-trivial application.

A series of articles covers the theoretical underpinning in more details (read chronologically -- concepts are built progressively). A specific article shows the step-by-step building of the showcased sample application. A shorter introduction can be found in the README for the repository.

So what is a component combinator?

The simplest of those combinator is Combine (for instance Combine{{...}, [C0, [C1, C2]]}), whose DOM sink is the result of merging Cx DOM sinks into C0 DOM sink; and whose non-DOM sinks are the merge of the respective Cx non-DOM sink. Here the combining logic is a merge logic.

So the general principle is fairly simple and generic. Now let's see some practical examples of use.

The following implementation corresponds to the layout specifications :

The application would be correspondingly broken down as follows :

The Footer component itself is broken down as follows :

By using a container component which specifies where to distribute the DOM content of children components, it is possible to : separate layout concerns from feature concerns ; break down layout concern into smaller concerns in a organized, readable and maintainable way. The breakdown can be realized so that future layout changes mostly impact the LayoutContainer component.

The content distribution mechanism we use is the slot mechanism made popular by web components. Container components declare slots, and children components fill those slots with content (the InSlot combinator is one way to associate a slot to a component).

Note that all component combinators use the same default for merging children components' sinks (whether DOM sinks or non-DOM sinks). Those defaults have been extracted for our large oodebase and seem to cover the vast majority of the patterns which occurred in that codebase.

Two things can already be noted here : we haven't had to write any merging code by hand, and the structure of our application is more self-evident, i.e. simpler to read.

The following implementation corresponds to :

The (gory) nested routing switching logic is hidden behind the OnRoute combinator. With that out of the way, the routing logic can be expressed very naturally (in a very similar way to React router's dynamic routing, in which the router is a component like any other). There is no pre-configuration of routes, outside of the application. Routes are directly and naturally included in their context.

For instance, specification for a login section of an application could go as such:

A tentative code to implement those specification with our library would look like :

The same code could be written in a JSX-like dialect as :

The same code could also be written in a dedicated DSL :

Syntax, whichever chosen (we will work only with the first one) is but a detail. What is important here is that :

Next, we have a look at complex control flow logic (branching, jumping, looping, etc.).

The specification for a multi-step application process, as coming from the designer team, is as follows : 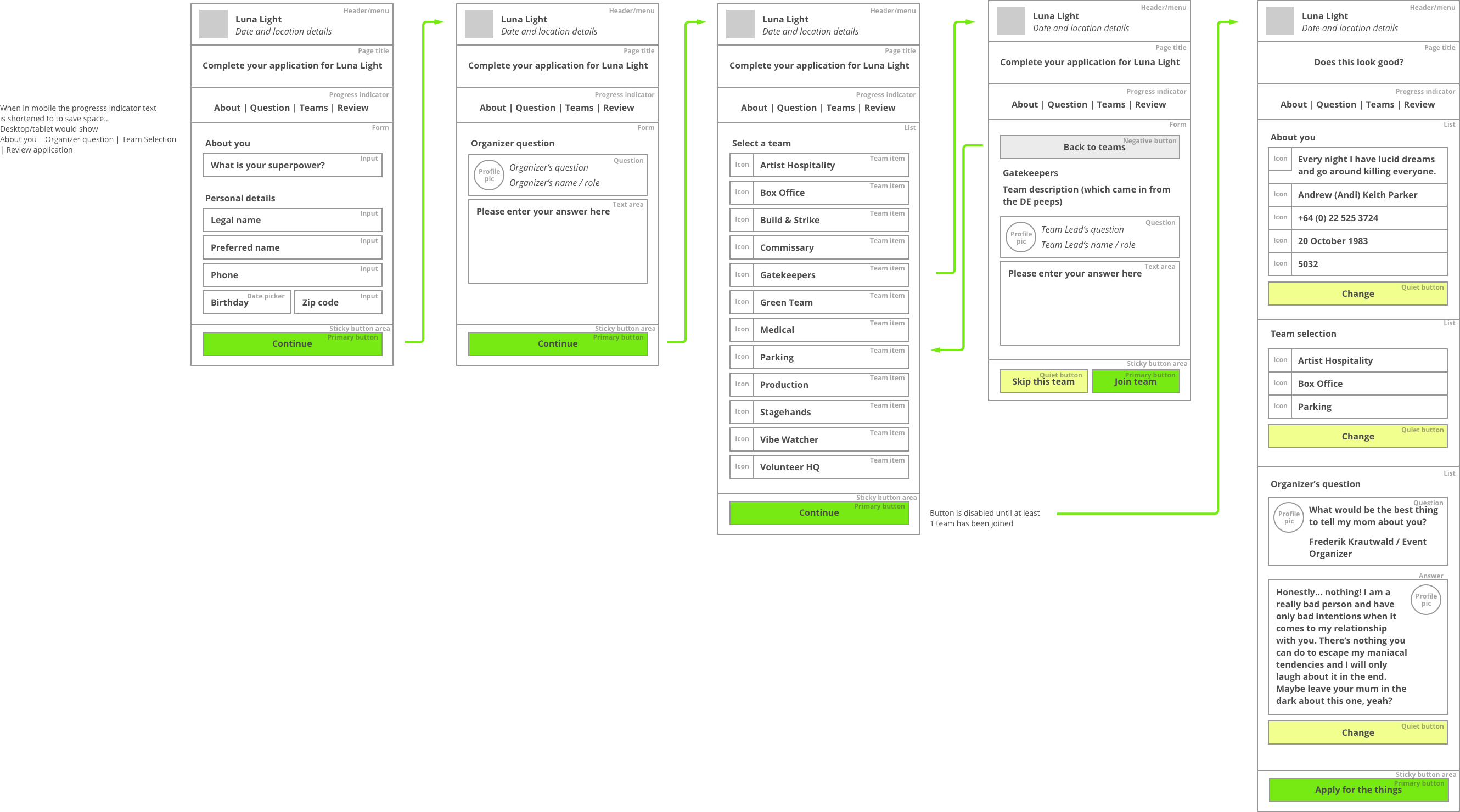 We have here a sequence of screens, with conditional transitioning logic according to the state of the application. That logic is later refined in parallel with the dev team to take the final control flow form : 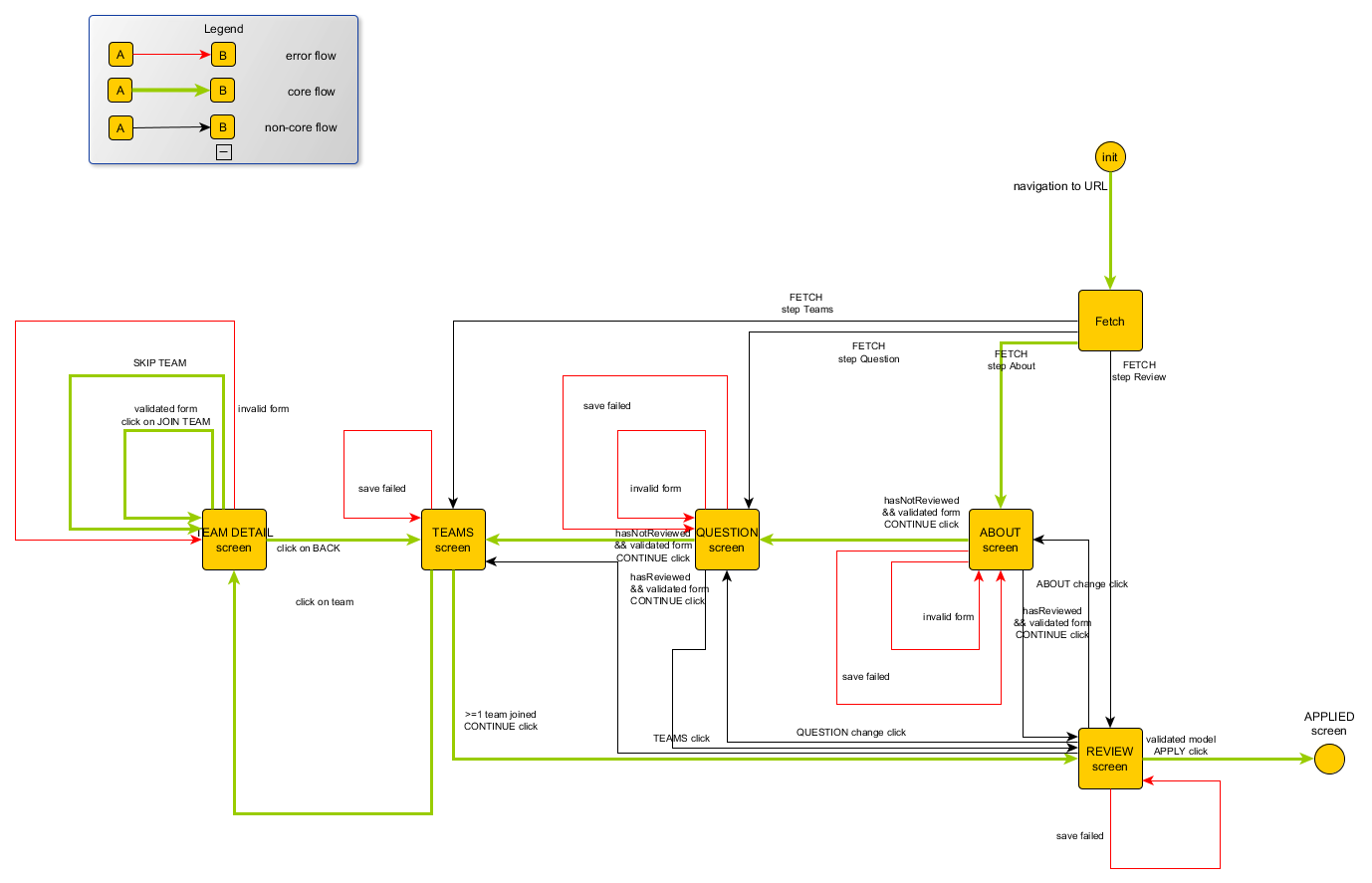 We won't include code samples here for the sake of brevity. The previous control flow graph is specified in the form of a state machine, and implemented with the EFSM component combinator.

We refer however the curious reader to :

The following implementation corresponds to :

Same as always, there is no gory stream-merging code in the way of understanding the application logic. Furthermore, edge cases attached to the iteration logic are already conveniently taken care of.

Composing an app from components

Taking a page from our showcased sample application, it looks like this (only tidbits, for full code see the example repo, for a step-by-step building of the application, refer to the corresponding article on my blog):

Displaying the list of items requires to get the item from a source. That source is passed through InjectSources :

Note the use of the ad-hoc combinators Navigation, NavigationSection and NavigationItem. They are for instance defined as :

This is the first introduction of the m component combinator factory. We will not expand here on the specifications for m, that is done in the corresponding documentation. It suffices to know that the first argument of m specifies the combining logic and that Combine is actually the partial application of m with an empty object (i.e. default combining logic is used). The Navigation component could for instance also be written as :

Unless you have to implement some very specific combining logic that we have not met in our large codebase, you should not have to use m in another form than Combine. If that should happen, you will need to delve into the documentation where we detail the three strategies we use for combining components. If you come up with a useful component combinator that is not here, feel free to publish it in its own package.

While the full syntax and semantics of the component combinators have not been exposed, hopefully the examples serve to portray the merits of using a component model, under which an application is written as a component tree, where components are glued with convenient component combinators covering frequently occuring patterns. I certainly think it is simpler to write, and more importantly, simpler to read, maintain and debug, which is paramount at scale.

Let's have a proper look at combinators' syntax and the available combinators extracted from the 20K-line cyclejs codebase.

The proposed library has the following combinators :

Documentation, demo and tests for each combinator can be found in their respective repository.

The theoretical underpinnings can be found as a series of articles on my blog :

Documentation for component combinators and drivers can be found in the projects portion of my blog.

The following packages are available :

Any of those can be installed with npm. For instance :

Tests are performed with good old QUnit, i.e. in the browser. This allows debugging code in the browser, and also the possbility in a debugging session to actually display some components' output directly in the DOM (vs. looking at some virtual representation of the DOM). To run the available tests, in the root directory, type :

Please note that library is still wildly under development :

The current roadmap for the v0.4 stands as :

Contribution is welcome in the following areas :

That is a paragraph that I am sure will grow with time :-)