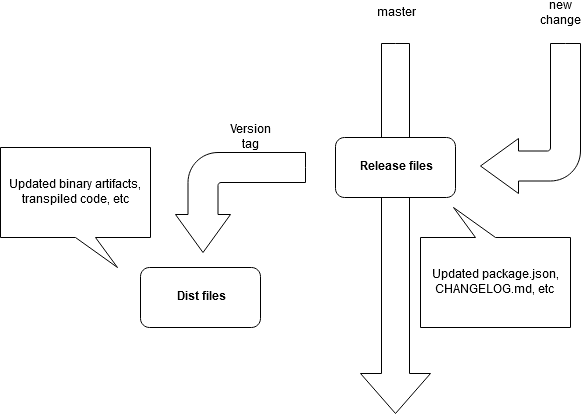 This pattern is useful when you want to have GitHub Releases that contain generated artifacts as part of the source tree, but you do not want these artifacts in master. A common usage of this pattern is the jquery repo - note how the dist/ folder on master is empty, but v3.4.1 contains artifacts.

Further, master still contains a release commit in it's tree, with the updated package.json and CHANGELOG.md, in the tree at the commit from which the dist tag forks. This lets master show releases rolling forward, without containing dist files.

Disclaimer: This pattern is not a good idea if your dist files are large binaries - note that while these files won't appear on the master branch, they're still tracked by git, and will increase the repo size, and slow some git operations. Here's a good stackoverflow article on the topic.

First, install this package, and standard-version as devDependencies:

Then, configure standard-version properly, in your package.json:

Then, run standard-version, with this package as a preset:

This replaces the built-in standard-version commit parsing logic, and tag generation functionality with our parser and tagger. Our parser is not configurable, by design. However, to further configure our tagger, use the following environment variables:

The TAG_BRANCH allows you to specify a branch that will be created as a fork of your REL_BRANCH in the local repo only to house the commit for the tag. This provides a convienient way to reference that specific commit, if you're unable to use the tag itself. In practice, this is rarely needed.

Once you're using the tagger, you probably want to push the commits and tags to github after each Continuous Deployment run. To do so: