A safe_app language binding for Node.js.

The safe_app_nodejs package is a Node.js binding for the safe_app Rust library which is needed by any desktop application to connect and read/write data on The SAFE Network.

Any Node.js application can make use of this package to be able to not only read/write data on the SAFE Network but also to send/receive authorisation requests to the SAFE Authenticator (see https://hub.safedev.org/discover for additional info of the Authenticator). 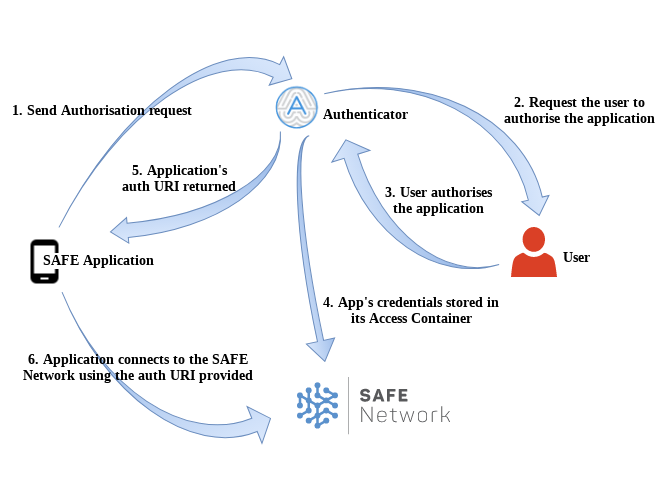 At a very high level, this package contains three layers:

As mentioned above, the safe_app_nodejs API is in its majority a 1-to-1 mapping to the FFI API exposed by the safe_app Rust library. Currently, at a high level, the following are the main areas covered by the API:

The documentation for the latest safe_app_nodejs API is published at http://docs.maidsafe.net/safe_app_nodejs/. If you are otherwise using a previous version of this package, you can also generate the API docs locally. Make sure you first install this package's dependencies with yarn, then execute the following command:

The documentation for the API is generated using jsdoc. The source code of the safe_app_nodejs package has comments embedded which can then be scanned by jsdoc script to automatically generate the HTML documentation website/webpages.

The API docs will be generated under the docs folder, you can simply open the docs/index.html file with your default browser.

Users and developers are welcome to use any of the experimental APIs to explore the features that are being actively designed and developed.

Although they should be aware of the fact that all/any of the experimental APIs may be changed, deprecated, or even removed in the future, and without much anticipated notification by the core developers.

The reason they are exposed is to just allow developers to experiment and start learning about the APIs at an early stage.

In order to enable the experimental APIs the --enable-experimental-apis flag needs to be provided when running the application that depends on this package, or alternatively, the enableExperimentalApis flag can be set to true in the initialisation options.

When any of the experimental APIs is called by an application, a warning message like the following will be logged in the console:

As explained above the safe_app_nodejs is just a Node.js binding for the safe_app Rust library, which is required by any SAFE app to connect and access data on the SAFE Network.

The safe_app_nodejs also depends on the system_uri Rust library to allow Node.js applications to register a system URI scheme required to interact with the SAFE Authenticator to send/receive authorisation requests/responses.

The safe_app Rust library exposes an interface which can be consumed from ant other programming language, this is achieved by the use of the Rust FFI feature.

This package makes use of the safe_app FFI through the Node-FFI library, which allows Node.js code to be able to invoke the functions exposed and implemented by the safe_app Rust library, sending and retrieving data from the SAFE Network through it.

The safe_app library is downloaded when the safe_app_nodejs is installed (with yarn or npm), this is done by a dependency downloader tool we maintain, which is inspired by electron-download. This tool downloads assets and libraries on demand for the specific platform, i.e. it will download libsafe_app.so (on Linux), safe_app.dll (on Windows), or libsafe_app.dylib (on OSX) accordingly.

Once the safe_app_nodejs package is installed, and the corresponing safe_app native library was downloaded, the Node-FFI DynamicLibrary function is used to load the shared library and start creating the JavaScript bindings (you can refer to this node-ffi tutorial for some more info).

Analogous to how this package interfaces with the safe_app FFI, the system_uri library API is also consumed through the node-ffi package and downloaded with the deps_downloader.

The source code files structure is very simple, at the root there are only three main folders:

This is where all the source code for the actual implementation of the Node.js language binding resides.

As explained above, the safe_app_nodejs package has an internal layer which takes care of the FFI to interface with the underlying safe_app native library. All the files belonging to the internal FFI layer are located in the /src/native folder.

All the automated unit tests using Mocha are within this folder and organised in subfolders according to the feature/functionality each of them test. See Testing section below for more details.

Using this package as a dependency

Each release of this package is published in https://www.npmjs.com/package/@maidsafe/safe-node-app, you can add it as a dependency to your project with either

Note: If you are compiling your own safe_app library for testing purposes, and if you want to be able to run the tests, make sure to include testing in your build features when compiling safe_app in safe_client_libs, i.e. cargo build --release --features "use-mock-routing testing".

If you do not require system_uri and would like to prevent it from downloading, first set NODE_ENV environment variable to either mobile_prod or mobile_dev before running yarn.

As an open source project we're excited to accept contributions to the code from outside of MaidSafe, and are striving to make that as easy and clean as possible.

With enforced linting and commit style clearly layed out, as well as a list of more accessible issues for any project labeled with Help Wanted.

This project adheres to the Contributor Covenant. By participating, you are expected to honor this code.

GitHub project boards are used by the maintainers of this repository to keep track and organise development priorities.

There could be one or more active project boards for a repository. One main project will be used to manage all tasks corresponding to the main development stream (master branch). E.g. https://github.com/maidsafe/safe_app_nodejs/projects/1. A separate project may be used to manage each PoC and/or prototyping development, and each of them will track a dedicated development branch.

New features which imply big number of changes will be developed in a separate branch but tracked in the same main project board, re-basing it with master branch regularly, and fully testing the feature on its branch before it's merged onto the master branch after it was fully approved.

The main project contains the following Kanban columns to track the status of each development task:

Issues should clearly lay out the problem, platforms experienced on, as well as steps to reproduce the issue.

This aids in fixing the issues but also quality assurance, to check that the issue has indeed been fixed.

Issues are labeled in the following way depending on its type:

We use Conventional Commit style messages. (More usually with a scope) for commits.

Commits should therefore strive to tackle one issue/feature, and code should be pre-linted before commit.

PRs should clearly link to an issue to be tracked on the project board. A PR that implements/fixes an issue is linked using one of the GitHub keywords. Although these type of PRs will not be added themselves to a project board (just to avoid redundancy with the linked issue). However, PRs which were sent spontaneously and not linked to any existing issue will be added to the project and should go through the same process as any other tasks/issues.

Where appropriate, commits should always contain tests for the code in question.

The change log is currently maintained manually, each PR sent is expected to have the corresponding modification in the CHANGELOG file, under the 'Unreleased' section. We are planning to start using standard-version shortly for maintaining the changelog.

Copyrights in the SAFE Network are retained by their contributors. No copyright assignment is required to contribute to this project.

You can discuss development-related questions on the SAFE Dev Forum. If you are just starting to develop an application for the SAFE Network, it's very advisable to visit the SAFE Network Dev Hub where you will find a lot of relevant information, including a tutorial to create an example SAFE desktop application which makes use of this package.