Look At Me Sideways (LAMS)

LAMS is a style guide and linter for Looker's LookML data modeling language. It is designed to help a team of developers to produce more maintainable LookML projects. 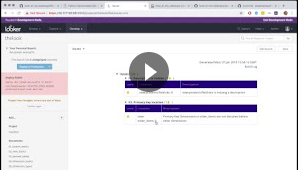 It currently does not resolve extends references, so if you are complying with a rule via extension, use a rule exemption as noted below.

You can opt-out of rules either globally or granularly using rule_exemptions.

The rule exemption syntax encourages developers to document the reason for each such exemption:

Note: For large projects with many exemptions, we suggest starting the reasons with the Y-M-D formatted date on which they were added, for easier review in your issue report.

If you want to entirely opt-out of checking a particular rule, you can specify the exemptions in your project's manifest.lkml file. See customizing LAMS for additional details.

One of the primary ways that LAMS gives developers feedback, in addition to any integrations with your CI workflow, is by adding its findings to markdown files in your project, so that they can be viewed in Looker's IDE. Here is an example of a resulting markdown file as displayed in Looker:

In addition to linting against its style guide, LAMS also lets you specify your own rules. See Customizing LAMS.

Although LAMS can be deployed in many ways to fit your specific CI flow, we have put together a few examples and resources to get you up and running quicker. (If you'd like to contribute your configuration, get in touch!)

If your LookML project doesn't have a manifest.lkml file, you may want to consider adding one! LAMS uses the following information from your project's mainfest.lkml file:

LAMS is Copyright (c) 2018 Looker Data Sciences, Inc. and is licensed under the MIT License. See LICENSE.txt for license details.

LAMS is NOT officially supported by Looker. Please do not contact Looker support for issues with LAMS. Issues may be reported via the Issues tracker, but no SLA or warranty exists that they will be resolved.

LAMS has primarily been developed by Joseph Axisa and Fabio Beltramini. See all contributors

Bug reports and pull requests are welcome on GitHub at https://github.com/looker-open-source/look-at-me-sideways.

Trying to install LAMS for development?

Publishing an update? The following hooks will run:

This project is intended to be a safe, welcoming space for collaboration, and contributors are expected to adhere to the Contributer Covenant Code of Conduct. Concerns or incidents may be reported confidentially to fabio@looker.com.