This is a fork of 'Wildhone/Leaflet.FreeDraw'. This fork fixes a few issues I was experiencing with touch support on the original library.

As of version 2.14.0 only leaflet >= 1.7.0 is supported. Please note, only android tablets and the chrome browser have been tested for touch support so no promises are made for any other type of device/browser.

FreeDraw allows the free-hand drawing of shapes on your Leaflet.js map layer – providing an intuitive and familiar UX for creating geospatial boundaries similar to Zoopla and others. Included out-of-the-box is the concaving of polygons, polygon merging and simplifying, as well as the ability to add edges and modify existing shapes. Note: For drawing polylines instead, try L.Pather. 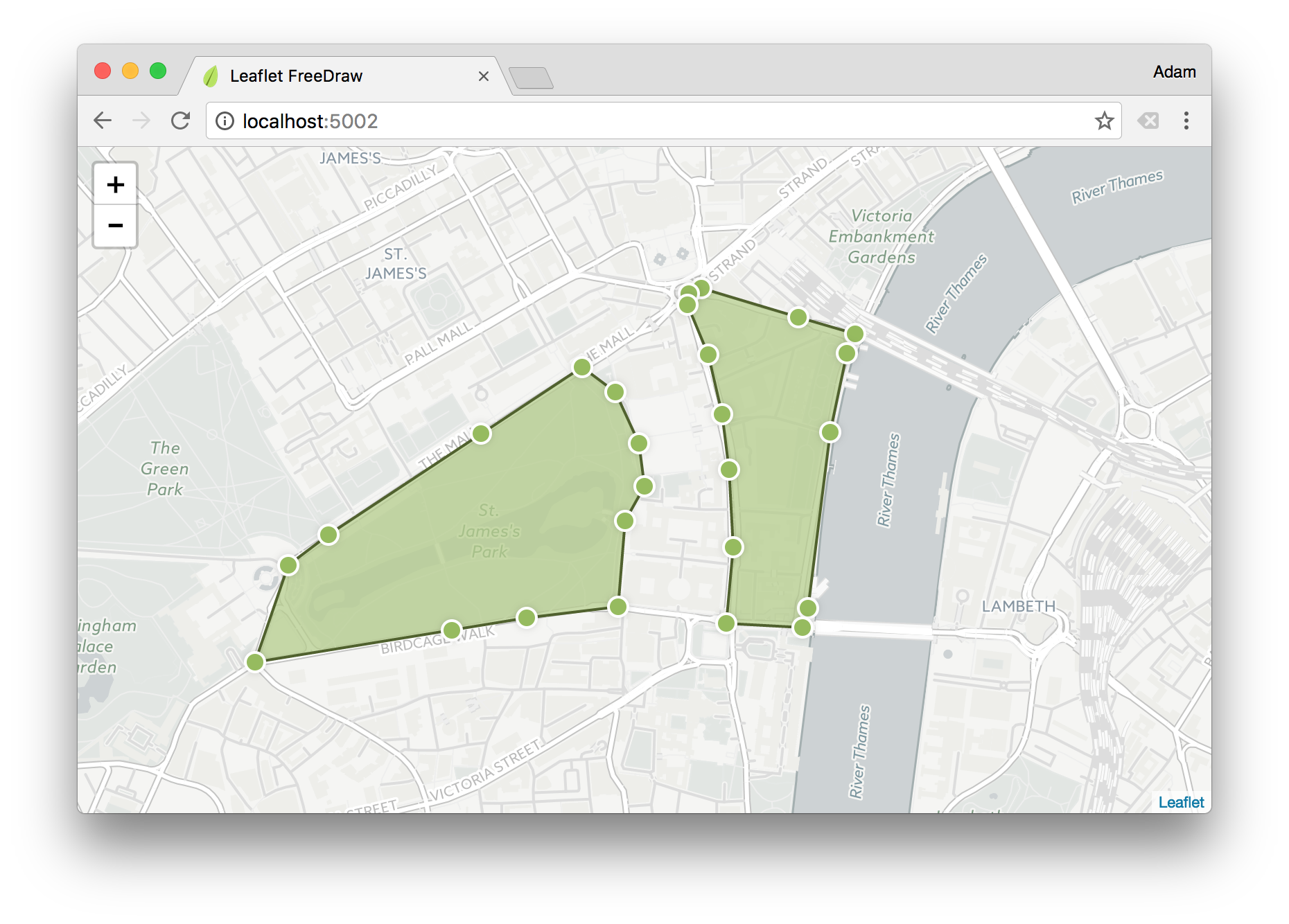 FreeDraw functions as a standard Leaflet module, meaning you initialise it and add it to your map layer via the addLayer function on your map instance – when you instantiate FreeDraw you can pass a set of options for behaviour customisation.

By attaching FreeDraw to your map layer, an SVG node will be appended to the DOM, and mouse event listeners will be attached to the map instance for creating and managing the geospatial polygons.

When a user creates a polygon an event is fired on the map instance called markers which you can listen for by using the native Leaflet on function.

Note: You can obtain the event type through the event.eventType field – such as create, edit, etc...

Once you have received the latitude and longitude values the next step would likely be to perform any necessary geospatial queries, and then render the relevant markers onto the map – for this you could use L.Marker and the native addTo method for placing markers on the map – however the important take-away is that FreeDraw doesn't concern itself with marker placement, as this is sufficiently covered by Leaflet.

By default the mode is ALL which means all actions can be performed on the FreeDraw layer — create, edit, delete, and append — you're able to modify the mode at any time by using the mode method, or upon instantiation by passing an object as the first argument.

By passing in the mode as CREATE | EDIT you're only allowing the user to create and edit polygons, they are not able to append edges, nor delete them. You may use the mode method post-instantiation to modify the mode at any time – in the case below to also allow deleting of polygons.

All of the following options can be passed in when instantiating FreeDraw in the same way that we pass mode in the previous examples.

By using the options above we can tweak how FreeDraw functions – whilst some of the options have obvious effects, others are much more tweak and see based on your expected outcome – such as the subjective simplifyFactor and elbowDistance options.

Depending on the current modes active on the map instance, the relevant classes are applied to the map container that you instantiated L.Map with – by using these class names it allows you to tailor the UX to the current mode, such as changing the cursor to crosshair when the user is allowed to create polygons.

From the above example if the current mode is CREATE | EDIT | APPEND then the three class names that will be present on the map node will be mode-create, mode-edit and mode-append, allowing you to provide a better UX from within your attached stylesheet.

With the instance of freeDraw there are certain methods for manipulating FreeDraw directly, such as creating polygon from a set of latitude and longitude values.

When using the create method to create polygons from an array of latitude and longitude values, the CREATE mode is disregarded, which means it doesn't need to be enabled to create to succeed – if you would like such behaviour then you could simply assert that CREATE is enabled.

Note: create method returns an array of polygons, as often it may yield more than one.

In the case of the cancel method it's often desirable to cancel the creation of the polygon when the escape key is pressed – for this you simply need to attach an event to the document.body.

You can add polygons to the map layer at any point by using the create method. You must remember to setup FreeDraw through Leaflet, rather than instantiating FreeDraw without tying it to a Leaflet map instance.